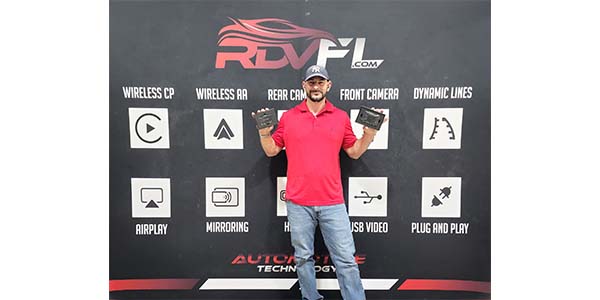 All  are simple plug-in devices that may be installed by the customer but they are sold only through car audio dealers, said Founder Rich De Sclafani.

The first device upgrades wired CarPlay and Android Auto to wireless CarPlay and wireless Android Auto and then adds phone mirroring. So users also get access on the radio to those apps that may not be available in  CarPlay/Android Auto.  It works with both iOS and Android phones and devices.  Called the CP/AA-MIRROR (it’s an interface, not a rear view mirror), it plugs in through the USB port and includes  2GB of RAM and 8GB of ROM.  Suggested retail price is $225.

A second device adds video streaming apps such as Netflix, Hulu, Sling and others to the car radio and lets you control the apps through the radio instead of your phone.  It also converts wired CarPlay and Android Auto to wireless. Called the STREAMER, it connects through the OEM CarPlay input for display and control. And it adds an an HDMI output so you can connect it to a headrest, overhead or other monitors.  It includes 4GB of RAM and 32GB of ROM.  Suggested retail price is $550.

RDV launched last month and will display at KnowledgeFest in Orlando, FL June 10-12.