iPhone 6 is raising a few issues when it comes to using your phone with your car radio that dealers should be aware of.

Most manufacturers are still in the testing process.  Kenwood and Alpine have not yet seen issues.  One supplier, who is still testing, said there may be some issues, but expects them to be solved with a software fix.

Installer Carlos Ramirez of NVS Audio, Linden NJ, (who performed one of the first iPhone 6 Plus in-dash installs)  has done a number of tests and found the following:

from Pioneer, Sony, Parrot and Cadillace (factory radio) failed to pair with the iPhone 6, but an update to the newest version of iOS 8– iOS 8.0.2–solved the issue.

The audio output of the new iPhone is lesser than the iPhone 5 using Bluetooth and the headphone jack output, according to two suppliers and NVS Audio.

The difference in audio volume was enough to generate a wave of phone calls to AAMP of America’s tech support line last week.  “It still plays, but it’s a noticeable difference,” said AAMP’s Jeremy Doran. But for most systems, if you crank up the volume you will still get full audio from the iPhone 6.

NVS  found that the headphone jack on the iPhone 6 produced .89 volts AC while the iPhone 5 registered at 1.009 volts.  For Bluetooth, using a Parrot Asteroid Smart, the iPhone 6 came in at 2.78 volts compared to the iPhone 5’s 3.14 volts.   But both the new and old versions of the phone produced 11.6 volts via USB, said Ramirez.

In a separate update, Dow Electronics working with retailer Soundwaves of Tampa in FL found that the Sony cradle radio works with the iPhone 6 Plus.   This means iPhone users can snap in their new iPhone 6 Plus into the face of the Sony radio and use the phone as a 5.5 inch touch screen to get maps, music and apps.

Sony’s radio, the XSP-N1BT, has an adjustable bracket that lets you slide in most phones onto the front of the radio.  For an iPhone, the user connects over USB and downloads Sony’s AppRemote app and then the phone becomes the user interface for the radio.  It appears that the iPhone 6 Plus will fit into the brackets, despite its large screen, but users must remove any case on the phone  (on smaller phones, you can retain your case–if it’s a thin one–and remain compatible with the Sony cradle).

As of Thursday evening, Alpine’s Steve Brown said, “We have not found any issues with iPhone 6 or 6 Plus Bluetooth compatibility and our products.”

Photo below of Sony XSP-N1BT with an iPhone 6 Plus via Mike Eckley of Dow Electronics as displayed in the showroom of Soundwaves of Tampa in FL. 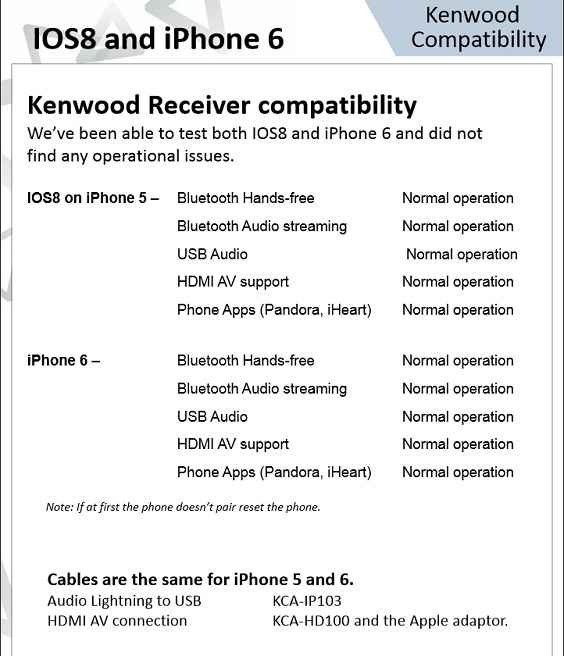