A First 12V iPhone 6 Plus Install 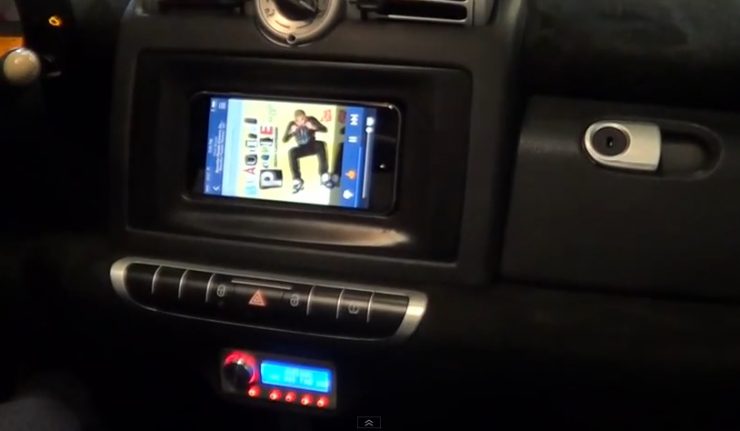 Here’s one of the first installs of the new iPhone 6 Plus in a car dash.

Carlos Ramirez of NVS Audio in Linden, NJ installed the 6 Plus in a Smartfortwo Smart Car using a removable mount.   He says the shop is already getting calls for custom installs of the device, because unlike an iPad, it doesn’t require a separate data plan if you are already a smartphone user.

Ramirez has 6 or 7 appointments for installs booked already.

Another benefit of the 6 Plus is that “The screen size is about the same size as a smaller unit from [some leading car audio brands] with 5.8 inch screens, so it’s not much smaller. And it actually fits in a double DIN opening,” he said.

Because of the simple install, an iPhone 6 “mod” will cost the user around $600.  That’s about half the cost of an iPad install.

Ramirez installed the Phone along with an Audison Bit one processor which then serves to control volume.

NVS’s removable 6 Plus mount places the phone in landscape mode, but some of the apps including Google Maps are not yet scaled to a full screen in that mode. But that may change. And Apple Maps does display full screen in landscape.