Meet the ‘Invisible Trailer’ From Brandmotion

Brandmotion displayed at the SEMA Show in Las Vegas this month, the first aftermarket “Transparent Trailer.”  It places a camera behind a trailer to send real time video to a streaming rear view mirror.  Now the driver sees live video footage from behind the trailer as if the trailer was fully transparent. 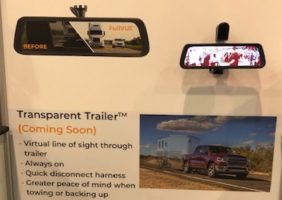 While General Motors offers a version called the “Invisible Trailer,” Brandmotion’s model appears to be a first for the aftermarket.   Additionally, Brandmotion’s “Transparent Trailer” is “always on” unless the drivers switches to manual mirror, where GM’s version requires a few button presses to access the feature, said Brandmotion President Lucas Frank.  See a video of GM’s version here.

Brandmotion offers a quick connect harness to connect the camera wire from the trailer to the truck.  The system then works with Brandmotion’s FullVUE mirror that streams video from a rear camera and shows it over the full width of the mirror. The  FullVUE FVMR-1000 mirror also has touch and swipe control.

Brandmotion hopes to offer the Transparent Trailer  by the end of this year or early next year at a price to be announced.