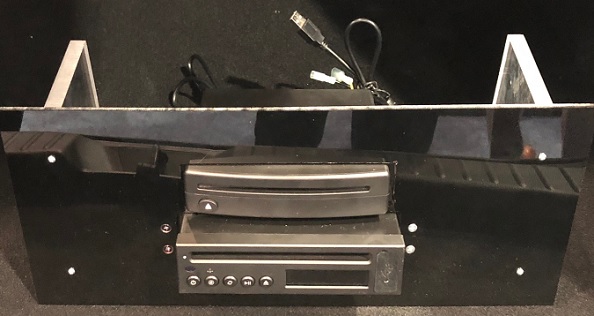 The more things change, the more they stay the same.  Once again, cars are starting to ship without CD players and once again the aftermarket may find itself in the business of adding CD players to cars that don’t include them at the factory.

VOXX Electronics displayed at the SEMA Show last week two prototype models of advanced add-on CD players that plug in to the car radio via USB.  The radio then recognizes the CD player as a USB drive and the radio can control the CD player.

A step up version automatically rips CDs as it plays onto a 32GB flash drive, creating a virtual CD changer.

The prototype CD players were displayed to gauge dealer reaction and VOXX has not yet committed to selling the products.   If they were to be sold, the company would target price points of $249 and $299, respectively, it said.

The irony of the aftermarket CD player is that it sounds better than much of the audio streaming from a phone.  So those looking for great sound might want to revert back to this tried and true, but older technology.

Already dozens of car models including popular Honda and Toyota vehicles ship without a CD player.  IHS Automotive says that by 2021, a quarter of cars will lack a CD drive.