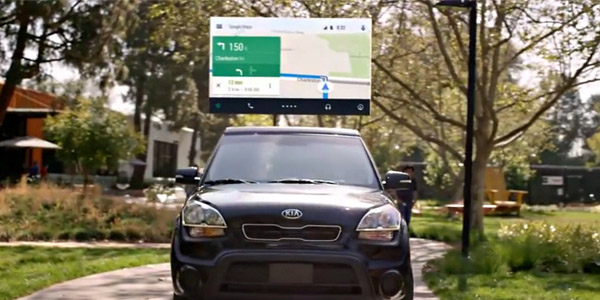 Google announced at its I/O developers conference today that Android Auto will soon reside on the phone itself, so that you need only mount your smartphone in a dash mount to get easy access to phone, music, maps and messaging, according to The Verge and Engadget.

An update to the Android Auto app is expected later this year that will allow it to run without the need to plug the phone into a compatible car radio. Users still get voice control, and obviously, those who own a larger phone, would have the advantage of viewing the app on a larger screen.

If the car radio supports Bluetooth streaming or has an aux in jack, you can run Android Auto through the car’s speaker system.

Android Auto is also getting other new features. Users will be able to say, “OK Google” to activate voice control, without having to push a button first.  The popular Waze traffic and mapping app will also be compatible with Android Auto.

Additionally, Android Auto licensees can now add their own software to Android Auto with the first renditions coming from Honda and Hyundai.  So auto makers can add features such as roadside assistance.

For more see Engadget and The Verge