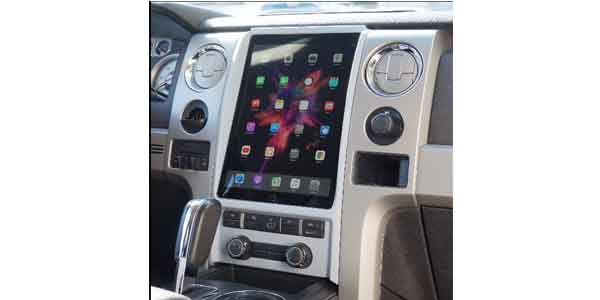 One of the side effects of the rise of CarPlay is that tablet installations in the dashboard have nose-dived in the past year for many car audio retailers.

Many consumers who sought out tablet installs for simple access to maps, messages, phone calls and music, are finding it’s all available in CarPlay or Android Auto radios, said retailers.

However, there remains a small but thriving niche among fabrication enthusiasts and some do-it-yourselfers who want a tablet in the dash for novelty as well as utility.

Tablet installs are down by about 80 percent at Soundwaves of Tampa, FL which posted popular iPad installation videos on YouTube several years ago.  “They are starting to fade out a bit..It’s not as crazy as when we first did it two years ago.  We now do 1 or 2 a month and we were doing one every 3 or 4 days,” said Soundwaves’ Rob DeCrane.

“We haven’t done a tablet install in a year. Ever since the launch of CarPlay, tablets in the dash are less popular,” said Nick Akin of Musicar Northwest, OR.

NVS Audio, Linden, NJ was installing a tablet a week and now does one every two months.   Proline Car Stereo in NY said tablet installs are down by more than 50 percent but they remain a welcome niche.  Proline’s Shef Sadik said, “We do about six per month. In the heyday we were doing about 15 per month. We make the kits in house … But I will tell you, we’ve seen a younger demographic coming into our locations [for the tablet kit installs], which is great; we’ve strived for that.”

Oscar Perla of Absolute Electronix, Gaithersburg, MD, said his shop has benefited from others abandoning tablet installs or steering clear of them.  “Not every shop wants to spend 2 or 3 days working on a tablet kit.  We’re one of the shops that people come to. We’re finishing one now for a 1998 Grand Cherokee. The car isn’t even worth what we’re charging for the kit.” A tablet kit and labor is usually about $1,200 at the shop.  The install requires down time for drying bondo, etc., so it can run two days.

Kit makers generally say sales are up or flat.

Jamie Fifield of Fifield Fabrications said he’s selling more kits because people are more aware that they are available.  “They are seeing the tablet-style radio in Tesla cars and think it’s amazing.”  He’s up 25 to 30 percent over last year.   But he says a fair number of the kits are sold directly to  DIYers versus retailers.

About 90 percent of Fifield’s kits sold are for the iPad mini he said but he’s seeing more iPad Air and iPad Pro orders than in the past.

Doug Bernards of Soundman Car Audio, which sells kits, said sales are up.  He moves around a hundred kits a month.  “Tablet installs are aimed at the ‘custom market.’ Our sales have continued to climb since launch.  He recently installed a 12-inch iPad Pro in an F-150 shown above. “It’s absolutely enormous and somewhat impractical!  But it’s about that WOW factor…” he said.