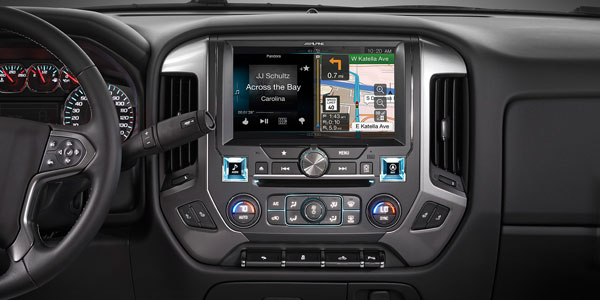 Alpine is now shipping a car/navigation radio with a 10-inch screen that is actually separate from the body/processor of the radio.

The new Alpine X110-SLV, which won a CES Innovation Award this year, has the largest screen in an aftermarket radio.   The screen becomes a bolt-on product, without any wire-cutting or dash modification, specifically designed for the 2014 and up Chevy Silverado, while the radio guts are mounted elsewhere in the truck.

Alpine is also releasing a similar new split-radio for the GMC Sierra.

Alpine said it is taking this split approach to the car radio because it is “the future path for new vehicles, which is why we decided to invest in the platform.”

It added, “ In the 2014-up GM trucks (and like many new vehicles), the radio in the dash is simply a screen with control buttons that is not physically connected to the actual radio chassis.

Alpine says “All of this happens with no cutting of the dash, which is necessary when installing a traditional 2DIN unit in these vehicles. We supply everything needed for plug-and-play connection, right down to the OEM camera connector. Since the Chevy Silverado is one of the best selling vehicles in the US, it was important for us to create a solution that is compatible with this truck. In fact, it can replace both the base 4.2” screen-equipped models as well as the 8” screen-equipped models,” said an Alpine spokesperson.

The X110-SLV comes with a dash bezel that matches the shape and color of the Silverado dash.   It has big function keys for navigation, music and more and the keys are back-lit with blue lighting.   It comes with a data module (iDataLink Maestro) to keep the factory features such as OnStar and steering wheel controls.

Drivers may choose an optional control module to work with the screen, converting it to a touch screen hub for truck accessories like a motorized truck bed cover, winch, air suspension, LED lights, headlights and more. Eight outputs can work with eight relay-connected accessories. And a graphical icon can be assigned to each accessory for quick viewing on the screen.

A similar version, model X110-SRA is available for the 2014-up GMC Sierra. The navigation/radios are available now at about $4,000 each.

Also shipping are the following new products from Alpine: