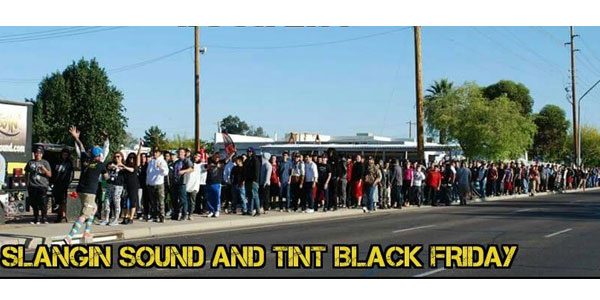 Slangin Sound is a shop in Mesa, AZ that draws a line out the door 3 blocks long on Black Friday.

People bring couches and tents and start lining up on Thanksgiving afternoon. So at midnight Thanksgiving, Bren Blanchette, Slangin’s owner of the past 6 years, offers the crowd tacos and Cokes.

“It blows my mind every time,” he said.   The first year, I remember seeing 50 people in line, now there’s hundreds of people. The line stays that long well into Black Friday late afternoon.

How does he do it? He offers door busters “that put Walmart to shame.” Does he make money? Yes.

“We’re salesmen…We always have the next model up that we make money on. We show that for a few more dollars, you get something much better. So we’re profitable.” Plus he moves kits and accessories. The shop grosses on Black Friday what it normally pulls in in two weeks.

It moves about a thousand subwoofers in one day and offers 20 door busters in total.

The catch?  It takes a lot of work to pull off the sale. “None of my competitors are willing to do the work we do to make this happen. I have literally seen them copy and paste my ads with their stuff,” he said, noting, “There’s months of planning,”   Each vendor requires about a full day of negotiations to iron out an order. “It’s fight club. We grind out a deal. I’ll order pallets and pallets from one vendor.”

After the shoppers leave the store on Black Friday, many actually return at 4:30 in the afternoon for a raffle, and so the store gets another round of business.

People come from Nevada, New Mexico and other nearby states, said Blanchette.

Not surprisingly, Blanchette’s strong suit is marketing. His Facebook page has 65,000 likes.

He wouldn’t tell us his annual sales but a clue is that his staff makes up to $80,000 salaries. And he credits them with playing a large role in the store’s success over the past six years. “They went from making peanuts the first year to making 60, 70, 80 grand. I couldn’t do it without them. They are the lifeline of the company.”

Why did Blanchette purse Black Friday so aggressively? “Black Friday is the biggest shopping day of the year. I want a piece of that pie. It’s work. It seems like nobody wants to work anymore.”

Blanchette was a consultant originally for Slangin Sound’s four owners (who wouldn’t take his advice). So the shop went out of business and he bought it.

He does have one tip for other shops—stay away from print ads. “Print is dead.”