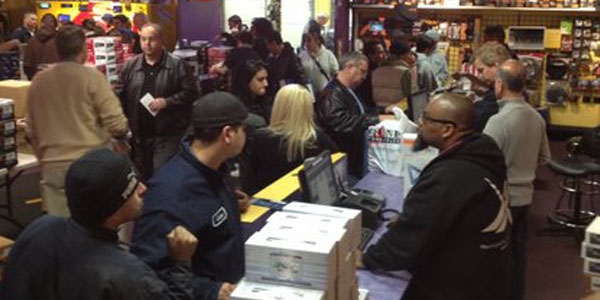 Car audio specialists may be late to the party on Black Friday but many “crushed it” this year, at least among members of the Mobile Electronics Specialists of America (MESA) buying/marketing group, according to Executive Director Ryan Gunter.

As a group, MESA members were up 34 percent for the Black Friday weekend compared to last year.  Newer “Gold” members who held their first Black Friday events this year, saw a 55 percent increase overall, said Gunter.

Custom Sounds, Austin, TX, with 16-stores, said Black Friday was the largest single sales day in the company’s history at $120,000.

Until recently, Custom Sounds avoided Black Friday and held sales on Saturday of the holiday weekend, assuming it couldn’t compete with the big box sales. But in the last few years, it held Black Friday specials and found it really paid off this year.  When customers were asked what brought them in, many of them said, “because I bought from you on Black Friday before,” said Custom Sounds’ President Mike Cofield (who is also President of MESA).

Sound FX of West Warwick, RI held its first major Black Friday promotion and said sales were up 200 percent with strong profits. Advertising was all by email or Facebook posts that were “boosted” with paid advertising. Most of the sales were remote start related. Mark D’Elia of Sound FX called the results “awesome,” and said, “It was the second biggest day ever here….We made a lot of friends.”

Black Friday guru, Mehdi Narimanian, President of Sound of Tri-State, who has held successful Black Friday promotions for many years, said sales were up 11 percent for the full weekend. Black Friday itself was flat but Saturday and Sunday made up for it. “I don’t know if it’s the gas pricing that helped our customer base because many retailers [outside of 12 volt] were down,” said Narimanian. This year, the 3-store chain based in Claymont, DE focused heavily on doorbusters. “We made sure the deals on the doorbusters were real deals and a good value, but kept it limited. And we added one more category, which normally we don’t do–window tinting. This time we promoted it and it brought in a lot of people who wound up getting other stuff.”

The chain says it is on track to break the $16 million mark for the first time, in sales for the year. That’s a $1.5 million increase after a $1 million increase the year before. Custom Sounds attributes much of the gains to its focus on selling profitable accessories and said Black Friday weekend was no different.

“We sold a lot of radar detectors, power wire, speaker wire, amp kits, integration devices, plugs and harnesses. People would say, ‘It will get it installed after Christmas,’ and we’d say, ‘Use these [accessories] as stocking stuffers.’” He added, “It if’s an amp kit, which is a big heavy thing, we’d say, ‘Here’s another present for you to put under the tree, if you are going to buy it later anyway.’”

Top photo: Sound of Tri-State during Black Friday this year.