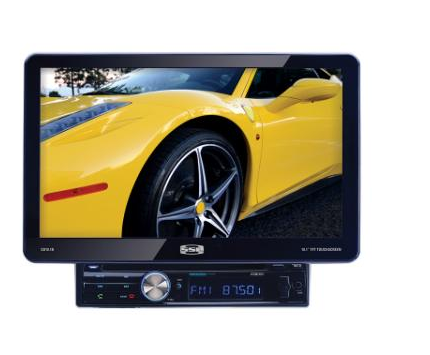 Soundstream, Power Acoustik, Farenheit, Sound Storm and Pyle all now offer models with 9 or 10 inch detachable screens, some of which function as a media player when not used in the car.

Additionally, Alpine which offers an 8-inch INE-Z928HD navigation/radio, says the unit has come to be embraced by retailers. Bigger is better, said Alpine, just like TV in the home.

“It’s a bigger is better kind of syndrome,” agreed Sound Storm’s Andrew Snook.  Of Sound Storm’s new 10-inch radio/deck he said, “It’s definitely been a success.  Our first shipment lasted about 6 hours.  And we’re anxiously awaiting our next shipment.”

Some oversized radio screens can’t work in certain cars because when the motorized screen flips up, it must clear any curves in the dashboard.  Also the screen may block AC/heating controls, although you can always retract the screen to turn up the AC.

For Epsilon, which markets under the  Soundstream, Power Acoustik and Farenheit brands, the radios with oversized screen have become its best-selling units.  In each case, the screen detaches and may be used as a portable media player.

“It took us by surprise. There were times we were on allocation last year,” said Epsilon National Sales Manager Chuck Kenney.  People like to take the screen into the office. It has a kick stand and AC adapter so they can watch movies or view other files, he said.

Sound Storm’s model is the SD10.1B with a motorized 10.1 inch detachable screen.   The single DIN radio/AV unit provides Bluetooth, AM/FM and rear view camera input.  The unit also has USB and SD card ports.  It began shipping in March at a suggested retail price of $428. (The screen does not function as a portable tablet).

Sound Storm is also now looking at an even larger sized screen, and a version of the SD10.1B without Bluetooth, said Snook.

Alpine said when it first released the 8-inch Z928HD, “We anticipated there would be hesitation from retailers about installing this product” as it was one of the first to stretch beyond 7 inches.  So Alpine added dash kits including a universal bezel for the unit. Alpine’s Mike Anderson said, “Once our specialist retailers began to embrace the universal trim bezel and realize the installation possibilities of the INE-Z928HD beyond vehicles with Perfect F.I.T. dash kits, our sales began to multiply.”

Alpine has no immediate plans to move up to a 9 inch radio in the U.S., although the company offers one in Japan.

Soundstream’s  single DIN radio with a 9.3-inch detachable screen/media tablet is the  VR-931NB. It comes with or without Bluetooth, and includes an AM/FM radio.  The screen/media player has aux in, USB and SD inputs so you can access music, movies and photos.  With an optional cable you can connect and control an iPod.  It carries a street price of $369.99 with Bluetooth.