Another Update on Best Buy 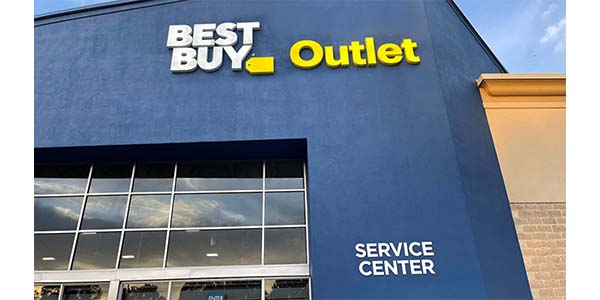 Best Buy said its new pilot outlet store with an Auto Tech Hub that serves as the 12 volt install center for several other stores is performing well.

The outlet pilot store in Charlotte, North Carolina, with open-box and clearance items and a service center, is achieving the same revenue as the traditional store location it replaced, but with lower overhead.

Best Buy CEO Corie Barry said, “This outlet is performing extremely well and is frankly on track to deliver revenue on par to the pre-converted conventional store, with a considerably lower operating cost and greater productivity. Those results give us confidence in our outlet strategy.”

Best Buy did not comment on the Auto Tech Hub specifically.

It did indicate the outlet store with the Auto Tech Hub is part of a “holistic market approach pilot” in Charlotte that also includes a 5,000 square foot digital-first store, we reported on earlier.

That store features a 7-foot digital display that customers see as they enter. It explains what’s new and how customers can shop.  Merchandise in the store is displayed with QR tags that are scanned to purchase and a store employee will bring out the product from a back room (similar to the Apple Store approach).

Best Buy’s results for its quarter ending July 31, provide insight into the economy that specialists may want to note.

Overall Best Buy sales for the quarter were down 12.7 percent compared to a year ago, during the thick of the pandemic when sales were up 20 percent.  But when compared to pre-pandemic levels, sales are up 8 percent, said Barry.

The company had planned for a sales decline as consumers began traveling again, but it did not expect the level of inflation seen now impacting basic needs such as food, Barry said.

It caused a more severe pullback in spending that led to ‘a promotional environment that was more intense than expected,’ she said.

That combined with higher “supply chain costs” led profits to nosedive to $306 million for the quarter, down from $734 million a year ago.

Consumers are opting for lower priced goods in some categories but not others.  In televisions, the trend is towards lower priced brands, she said.

Best Buy online sales are now 31 percent of sales, compared to 15 percent prior the pandemic.