In the last episode of the long celebrated Overhaulin’ TV show, car audio will play a key role, thanks to a team of 12 volt rock stars including Bryan Schmitt, Tom Miller, JT Torres and Gary Bell along with Arc Audio’s Fred Lynch.

The build for the show is a 1964 Chevy Impala for basketball great Shaquille O’Neal.

Schmitt of Mobile Solutions said he received a call from Arc Audio inviting him to participate in the build.  Miller of MusicarNW, OR; Torres of Automotive Entertainment, CA; and Bell of Define Concepts, CA were also asked to join the team.

“The four of us agreed it made sense and it would be fun to do together,” Schmitt said. It turns out Torres’ shop is a block from the Overhaulin’ set.  Torres found an identical ’64 Impala to Shaq’s– a rust bucket but intact– so the gang began using the “donor” car as a test bed and eventually built on the car and transferred product to the real Impala on the set. 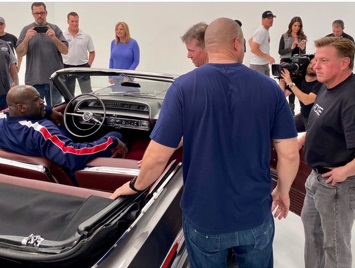 “It gave us a lot more control over it,” Schmitt said. “There are 30 people climbing in and out of this [Overhaulin’] car at one time. The floor wasn’t even in the car when we started.  We were able to do all our homework on the donor car…They filmed us at both shops. That was the first time ever that anyone has done that on the audio side…”

He continued, “Tom and Chip Foose came up with the design together.  Foose came over [to JT’s shop] by himself one night.  He showed up in his Ford F150 and he walked in and said, ‘Hey guys, What’s up?’” Foose began sketching, “I thought Tom was going to fall over.  Foose pulled out a notepad and sketched right in front of us and Tom redrew it and from then on it was our blueprint,” said Schmitt.

They did the reveal in a sound studio in Hollywood.

“Shaq absolutely loved it. I dare say he liked the system better than the car. He was jamming out. … He said it was one of the best audio systems he’s ever heard. All the guys from Overhaulin’ said ‘We’eve been at this a long time and we’ve never seen a crew like this.’”

Arc Audio’s Lynch has shared a long friendship with Overhaulin’ designer Foose. They met at a car show in the 90s and became friends. Arc Audio became a car audio supplier for the show.

Lynch said of Foose, “He is one of the most humble, and organically open-minded individuals when it comes to working with customers and other builders.”

Commenting on the group build, Lynch said,  “It was honestly a very well-matched group.  We all went there to teach each other and learn from each other at the same time.  There was no one superstar…it was a team effort in every way.”

The episode went live last week on the Motor Trend app (paid subscription required) and had received 2.5 million views in a few days.  The show is expected to air on broadcast TV at a date to be announced. The TV version will have a longer car audio segment than the app version, said Lynch.

The audio system for Shaq’s 64 Impala was as follows: 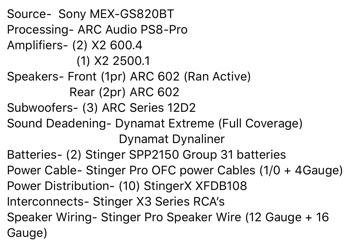