Custom radar detectors are high end systems that are permanently installed in the vehicle. They can cost from $2,500 to $10,000.

ESCORT claims it has added more custom radar/laser dealers in the past 6 to 7 months than it has in the last 3 years as dealers look for new profit centers. K40 said it’s seeing more retail customers.

For some high end retailers, custom radar can comprise more than 20 percent of their sales.

So we asked some of the most knowledgeable and successful retailers in custom radar detectors, and several top suppliers, to share their tips on selling and installing the products. Here’s what they said:

One: The number one pitfall to avoid is not offering it to the customer. “If you never offer it, you are never going to sell it.  A lot of folks believe they can’t sell a $5,000 to $10,000 system and they are right if they never offer it,” says Nick Aiken of Musicar Northwest in Portland, OR.

“You’d be surprised how many people don’t know that they can get a stealth customized installed radar and laser system for their vehicle,” said K40’s Rachel Clark.

Two: Know your stuff. “Speakers are subjective, [depending on the sound you like], but radar/laser is mathematical technology we can measure. With radar/laser it’s up to the retailer or salesman to have as much knowledge as they possibly can. Back before I knew a lot, I may have sold one system a year … I [now] make a point of knowing more than the customer and what they can Google….” said Aiken.

“When I get asked a question and I don’t know the answer, I lose credibility and when I ask for $10,000 at the end of the conversation, they need to feel confident in me,” he added.

He now sells about 6 radar laser systems a month.  He says one great site to educate yourself (that your consumers will likely have checked out) is Vortex Radar.

Radenso Radar’s Jon Dandrow agrees with Aiken. “The biggest thing I’ve seen is the category is becoming more technical. There’s new threats such as MultaRadar. And what’s happening is customers are doing research online and walking into the dealership and many times the installers there don’t have time to do research online. If the customer is aware of something and the shop is not, they may lose the sale.” 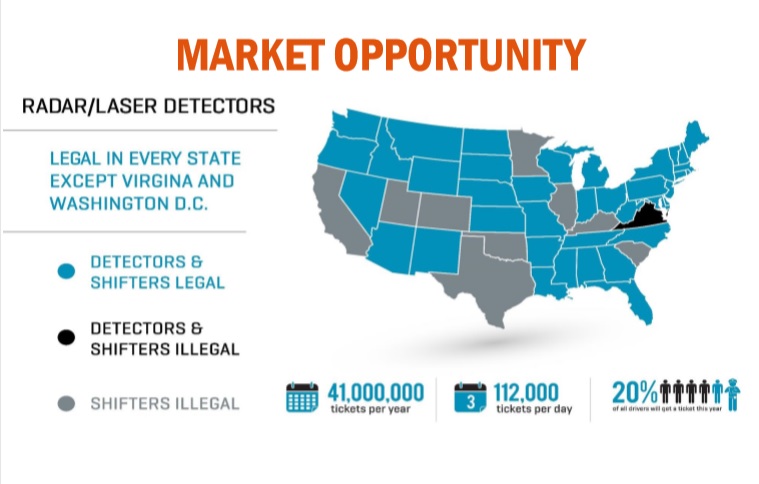 “If you did a full front and rear radar with front and rear laser it would require a minimum of 32 hours in my opinion, depending on the car.  With a Porsche, you could be talking 30 hours and with a Lamborghini, 100 hours,” he added.

Four: Know your state laws. Some states allow laser jamming and other don’t. (See map above).

Five: It should take an installer 2 to 3 installs to really get familiar with custom radar. The installs are straightforward but they make take a longer time until you get a few under your belt, said Aiken.

Six–Purchase a low output radar test gun from a sporting goods store to use in a demonstration. (They are typically used for measuring the speed of a baseball pitch).  Then buy a laser tester. The two together should cost under $200, said Karnes.

FACTS TO HELP YOU MAKE THE SALE:

One in 5 people will get a ticket each year.

The cost of a ticket may run about $150, but if you add the bump in insurance fees, an average ticket will cost $900, says ESCORT.