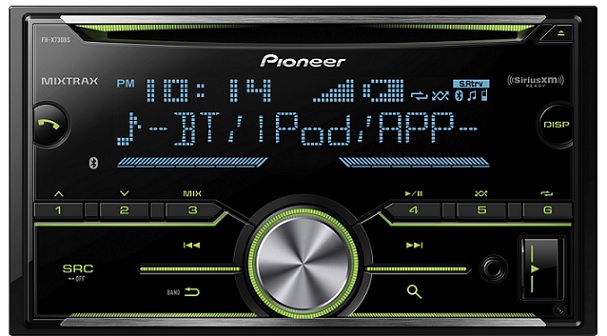 Pioneer Electronics announced Friday six new CD receivers and a CD-less receiver all with Spotify, allowing users to control Spotify from the radio (when used with a connected phone).

Spotify control will work with both iPhone and Android devices. Listeners can play, pause and skip tracks using the Pioneer controls, and with a few taps, they can browse playlists, albums and radio stations.

Premium Spotify users can download music and listen offline with no internet connection.

The system works over  Bluetooth for Android devices and USB cable for iPhones.

All include Bluetooth audio streaming and the ability to maintain a full-time connection to two phones.

All the new radios offer Pandora and all but one — the FH-X731BT –have SiriusXM capability. Three models also include HD Radio—the DEH-X8800BHS, DEH-X7800BHS, and FH-X830BHS.

The new decks also include FLAC playback via USB at up to 44kHz/16bit high resolution.

In addition to Spotify, the new line includes other features found on Pioneer’s higher end NEX line including Auto EQ and  Time Alignment circuitry, it said.