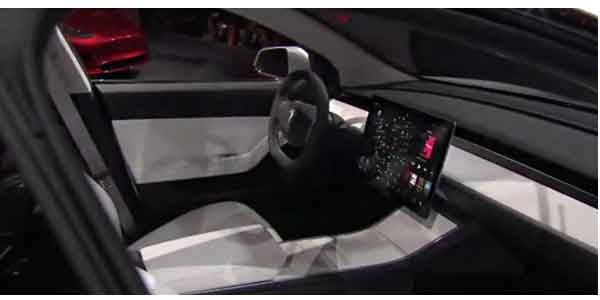 This new car may have the ultimate “tablet dash.”

The whole dashboard on new Tesla Model 3, which went on “pre-sale” last week, includes just a 15 inch infotainment screen.  There’s no gauge clusters behind the wheel. You must glance at the tablet for your speed and battery level.

The tablet is planted mid-dash in landscape mode (earlier Tesla models had 17 inch screens sitting vertically in the console).

Reuters says the screen is made by LG , but that’s about all we know of the infotainment center.

The Verge speculates that the dash is so bare because the car will be able to function as an autonomous vehicle, so the single screen mid-dash will be sufficient. That’s actually not far- fetched as the car actually ships around Christmas 2017 and Tesla has said it plans an autonomous car by 2018.

The Model 3 should be more than a flash in the pan.  After only four days of reservation-taking, it became the top selling small luxury car, with reservations topping 276,000, said the Wall Street Journal on April 3. (Note: not all reservations may turn into sales, however).

As for other vehicles with tablet-like infotainment systems, the Volvo XC90 has a 9.5-inch tablet-like screen.  And many car makers have recently shown concept cars with tablets in the dash.

You can see more specs on the Model 3 here.