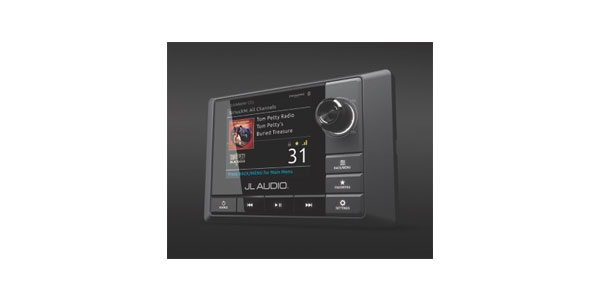 The deck may be used in car audio applications but that is not its intended application.

It will ship in limited quantities this month with full shipments available in April.

JL Audio’s president, Andrew Oxenhorn said: “The MediaMaster is a very important product for us, as it creates an opportunity to build a full JL Audio marine sound system, from source unit to amplifiers, speakers and subwoofers.”

The radio is marine grade and weatherproof (IP66 rated).  It does not include chip amplifiers, as used in most marine source units, said the company. Instead it uses “audiophile quality” preamp-level audio circuits in an 8-channel architecture with 4V RMS outputs. The design allows system building flexibility for four zones including a subwoofer zone.

It is SiriusXM ready and NMEA 2K compliant so it can network with other marine electronics.

JL Audio’s Jeff Scoon said, “The audio engineering team focused on making a better sounding head unit, the hardware team on making a classy looking product that could withstand real marine conditions, and the software team created a beautiful interface that works great on the water.”

The MediaMaster has a full color 3.5 inch CD display with day/night modes and it works with optional MMR-20 remote controls.

Here are the system configurations supported by the unit: