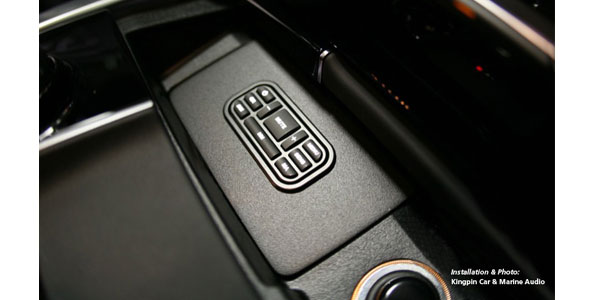 K40 has introduced a wired version of its controller for its installed radar detectors. The controller was inspired by its dealers who were taking K40’s wireless controller and fabricating it to mount directly in the dash.

So K40 created a wired controller of its own that has a factory look worth of a Ferrari, it said.

“We wanted to offer something where the hard work was done for the fabricators, instead of their having to figure out how the wireless goes,” said Grant Dahlke.

The new controller is backlit in white light and offers full controls including mute, volume, filters, and mark to mute (to filter out a false alert from a known falsing source such as a local automatic door opener).

K40s new RL360i Expert and RL200i Expert will each now come in different versions, with either a wireless or wired remote.

Called the Expert Control Unit, the controller was tested by dealers including Jason Kranitz, owner of Kingpin Car & Marine Audio,  and Josh Landau of JML Audio in St. Louis.

The RL360i Expert is a separate front and rear mounted radar receiver system. It provides 360-degree protection against police radar.

The RL200i Expert is a front only remote mounted radar receiver system.