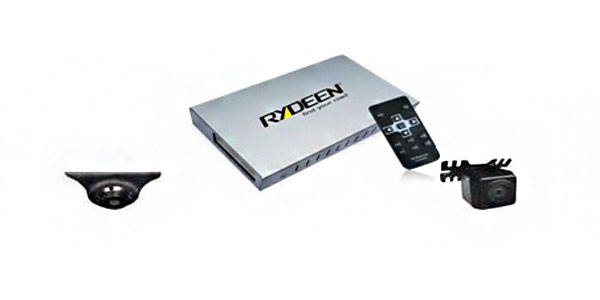 Rydeen Mobile Electronics announced the release of a digital video recorder (DVR) for the car that allows continuous recording through the “eyes” of four cameras (front, sides and rear). The system can also act as a trigger for the cameras when connected to a turn signal to create a blind spot monitoring system.

When used with a separate monitor, the DVR (model BVR 400) will send an image of the right or left camera when you activate either turn signal.  It allows the driver to view either side lane without blind spots.

As a DVR, you get a 4-channel device with real time recording from any of the 4 cameras connected to it.  The DVR is always recording input from all four cameras and you may select which to view on an optional monitor. In the case of a road event, the built-in G sensor will trigger the recording function.  This also works if the car is parked and nicked in the parking lot or on the street.

The front and rear cameras use super CMOS sensors with night vision technology, 170 degree wide viewing angle and minimum illumination of 0.3 Lux.  The left and right cameras are similar with a 150 degree viewing angle.

The DVR has a Micro SD slot that supports up to 32GB and it has a resolution of 480P.  It is shipping early next month at a suggested retail price of $399.