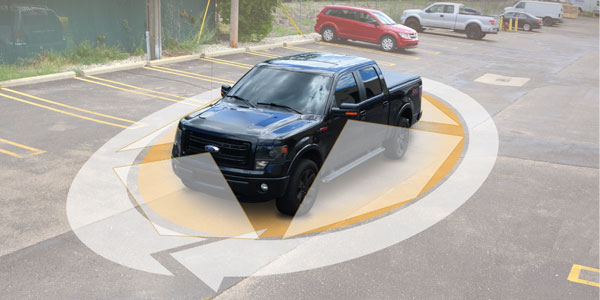 Brandmotion is now moving beyond backup cameras and will enter the advanced driver safety category in a major way.

“We are expanding beyond the rear vision category into new channels of safety products that will help drivers,” said Scot Clemons.

The new 360 degree camera line is customized for certain pickup trucks as well as the Jeep Wrangler.

“We’ve pioneered many advancements in rear cameras since 2009, and this is clearly the next logical step for advancing driver and pedestrian safety,” says Brandmotion president, Jeff Varick.

The system includes a flush mount camera pod under each side mirror and a front facing and rear facing camera and a “brain” that stitches the images together into one view.  The pickup truck systems will include a tailgate handle camera and the Wrangler system will use a camera mounted on the spare tire carrier.

Users will see on the car’s display screen, a bird’s eye view of the truck at the same time as the images from the front or rear cameras. Users may also toggle between other camera views.  The forward camera may be activated at speeds under 7 mph.

The system must be calibrated with a special kit available at $199.99 but its free with an order of 3 kits and may also be rented (sent with the order and then returned).

The product will be shown at during SEMA in Las Vegas in November at Brandmotion’s booth, No. 11661, located in the North Hall.