Believe it or not, sales of in-dash navigation rose slightly during the first half of 2015.

Despite the headwinds of smartphones and apps like Waze, in-car navigation (NOT including portable navi devices) rose by 1 percent to almost $38 million from January to June compared to the same period a year ago, said the NPD Group.

Total sales of all traditional car audio, excluding navigation, also rose ever so slightly to $393 million, up 0.1 percent for the first half.

Car speakers saw a 0.7 percent rise to about $120 million for the first half and in-dash decks of all types rose 1 percent to $255 million.

The only category to decline (by a fraction) was amplifiers, which dipped 0.2 percent compared to last year at $48 million for the first half, said NPD. 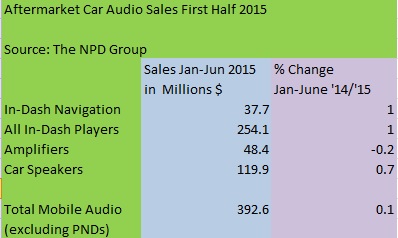