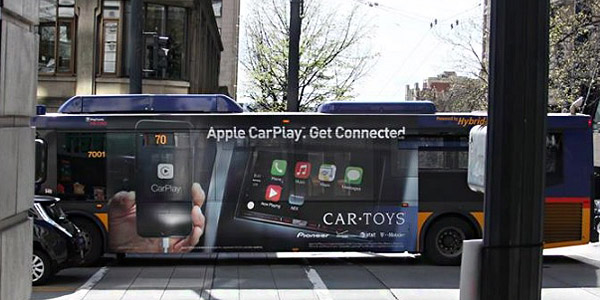 Consumers across the country will soon be viewing advertising for CarPlay and Android Auto from some of the prominent retailers in car audio.

MESA, the Mobile Electronics Specialists of America buying/marketing group filmed CarPlay/Android Auto TV ads Monday for release to its retailers in 2 weeks.  MESA says it expects the vast majority of its more than 125 retail members to use the ads either on TV, social media, Pandora or even in movie theaters.

MESA ads will feature the same characters that have appeared in its past eight TV ads.  The story line will show how CarPlay and Android Auto can be used in every day lives.

Car Toys ads include billboards, signs on buses and “a large radio campaign,” and they focus on CarPlay (not Android Auto), showing a Pioneer CarPlay ready radio.  The campaign will run through mid May.

Both Car Toys and MESA are bullish on CarPlay.  A MESA spokesperson said of CarPlay and Android Auto, “These are really exciting new technologies that drive customers into our members’ stores.”

Warren said, “..CarPlay is big.  Both Android Auto and CarPlay are top priorities for Car Toys.  We’re super excited about the technology and we’re promoting it heavily.”