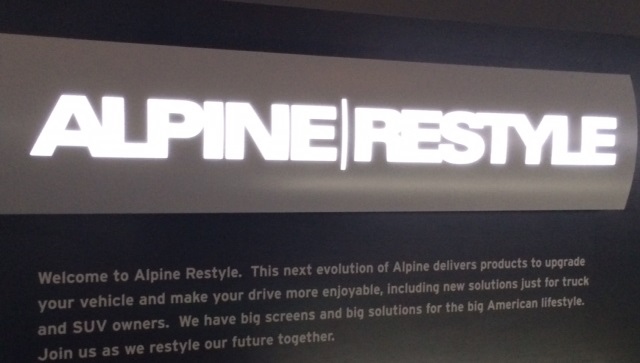 Alpine is launching a new 9-inch radio under its Restyle line at CES 2015.   The X009 –RAM works specifically with the Dodge Ram, offering the largest screen available in the aftermarket.

Alpine was first to supply a 9-inch radio last year with models for select Ford and GM vehicles plus a universal version.

The new X009-Ram comes with an iDatalink Maestro module to retain Dodge factory features and it has a wiring harness specific to the truck. It works with all Ram models except those with the 8.4-inch OEM screen.

The deck is an Audio/Video/Navigation receiver with HD Radio and Bluetooth that displays customizable gauges and truck info on the screen. It also offers Pandora control via Android or iPhone devices. Other features include audio streaming and SiriusXM compatibility plus Alpine’s TuneIt App for audio tuning.

It will be available in January at a suggested retail index of $3,300.

Also from Alpine is a CDE-164BT CD receiver with built-in BT Plus advanced Bluetooth technology and audio streaming. It provides Pandora control for iPhone and Android phones and is Sirius/XM ready. It allows TuneIt App audio tuning for features like like crossover, time correction and parametric EQ. Plus you get text to speech notification of Facebook activity. The radio will ship in January at a price to be announced.

The amp works well with truck-specific speakers and a compact subwoofer. It will ship in April at a price to be announced.