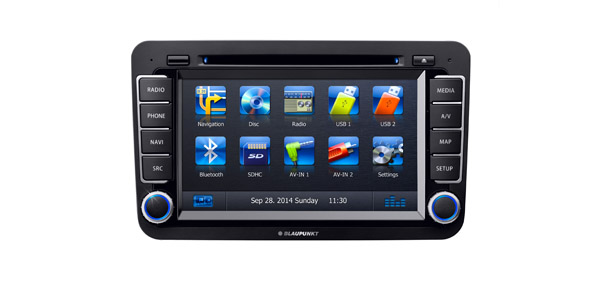 Blaupunkt announced the launch of its first car-specific radio–a new “Philadelphia” model that can link to the CAN interface of the car.

In addition, the company announced two new car audio decks including an HDMI mechless AV receiver. Plus, it is showing digital video recorders (DVRs) and a tire pressure monitor.

The new car-specific Philadelphia 845 DVD receiver works with select Volkswagen models from 2003 and up.  It retains the car’s factory climate controls, and park assist system (with up to four front and four rear sensors), as well as multi-functional steering wheel controls.

The VW-specific DVD deck also provides navigation, Bluetooth and 7-inch TFT anti-reflective touch screen.  It has a suggested retail price of $899.99 and will ship in Q2.

Blaupunkt’s new DVRs are full 1080p HD models with large external memory capacities. The models BP 5.0 and 2.0 can be used for both travel documentation and monitoring.

The step up 5.0 includes WiFi and mobile app control.   You get wireless video streaming to a smartphone and you can control the DVR by a phone or tablet. It allows two way voice communication and Internet live streaming at $299.99 with shipping in Q1.

The basic 2.0 model at $99 suggested retail price ships in Q1 with a 2-inch color display, plug and play set up, loop recording, G-sensor and motion detection.