Car audio/video/navigation sales to dealers are expected to fall slightly this year or by 2 percent to $1,056 million compared to $1,078 million last year. This follows an almost 7 percent decline in sales estimated for last year, said the Consumer Electronics Association in reporting its 2014 forecasts for all categories.

By contrast, home audio sales are now triple those of car audio, and are expected to grow by over 4 percent this year, after a strong year in 2013 that saw an estimated 15 percent growth.

Said the CEA’s Steve Koenig, “The aftermarket has been and continues to be under pressure from the vehicle OEMs and the technology they build in. Meanwhile, we’re seeing some lift in home audio from soundbars and to a lesser extent architectural speakers (that likely correlates with rising home starts).”

Sales of portable audio have actually been declining in dollar sales since 2012.  Sales to dealers this year were estimated at $5.23 billion, down from $5.9 billion in 2011.  They are projected to fall again to $5.05 billion in 2014, said the CEA.  In units, sales should increase this year after falling last year. 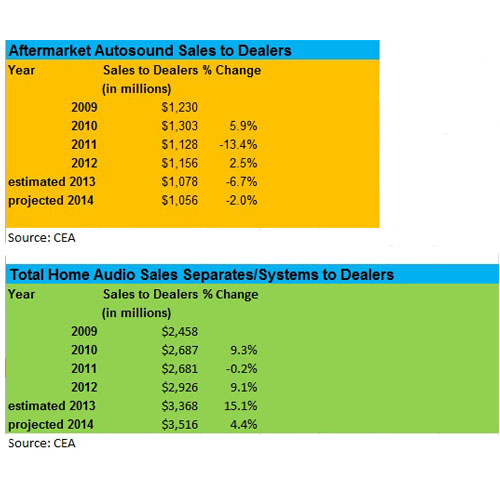