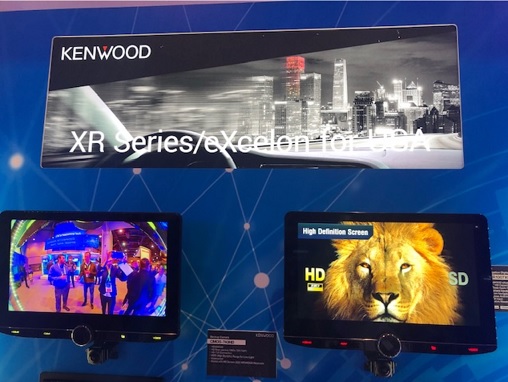 Kenwood’s version includes a non-navi mechless model with 10.1-inch High Resolution screen and a version with built-in Garmin navigation.  Both use a double DIN chassis with a floating adjustable 1280 by 720 screen– one of the brightest on the market.

The DNR1007XR (with Garmin navigation) and the DMX1057XR (AV deck) are both eXcelon models under the XR series with wireless CarPlay wireless Android Auto mirroring.  They offer the new LDAC Hi-Res Audio capability and feature 4 camera inputs   They have HDMI inputs and are iDatalink Maestro ready.   They may be released this summer, but no firm shipping or pricing was announced here.

The JVC version is the model KW-Z1000W with gesture touch control and many of the same features as the Kenwood non-navi model.

All three models are SiriusXM ready.