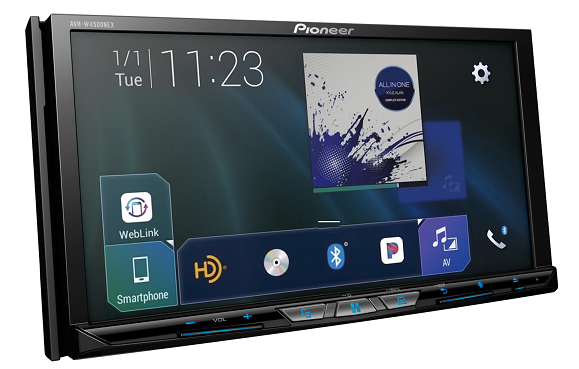 Pioneer is adding Alexa capability throughout its lineup.  It is also introducing second generation versions of its top line radios with wireless CarPlay and wireless Android Auto.

Pioneer’s approach to Alexa is to include it in two apps–one for single DIN and mechless radios and the other for AV decks.

Pioneer already offers a Smart Sync app that allows your smartphone to become the screen for single DIN and mechless radios.  Now it has added an Alexa soft button to Smart Sync, so you can say, “Alexa, play Van Halen on Amazon Prime Music,” or issue any typical Alexa commands.

AV radios get Alexa through WebLink, a new ‘super app” added to some 2019 Pioneer models. WebLink allows you to add many popular apps to the car radio. To get Alexa, the user also downloads a new Pioneer app called VOZSIS.  An Alexa soft button then appears in WebLink.

The new second generation wireless radios from Pioneer retain the same prices as last year at $700 for the AV, 6.2 inch wireless CarPlay-only model and $900 and $1,200 for the combo wireless CarPlay and wireless Android Auto models with built in navigation.

New models are the:

Shipping is expected in February.