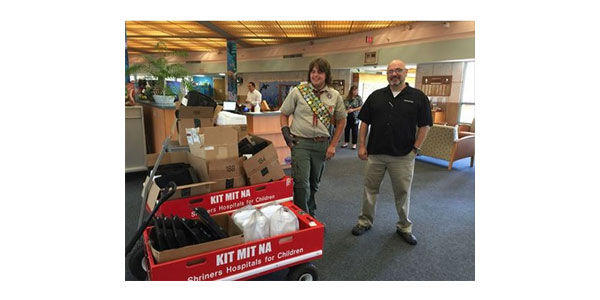 Tunes N Tint with help from Kenwood, the Mobile Electronics Specialists of America (MESA) buying/marketing group, and Scosche donated 48 tablets and car mounts so that the van ride to and from the hospital might be less scary to child patients.

Kenwood’s Bill Freeman pictured above with Eagle Scout Joshua Adkins, who spearheaded the project, and Tunes N Tint’s Joe Cassity officially awarded the tablets to the Tampa  Shriner’s hospital in Florida this week.  (We announced the project late last year, but the tablets were awarded Thursday).

Kenwood donated rear seat video tablets with the assistance of MESA and Scosche donated tablet mounts for vehicles.  Also Ben Vollmer of Businessworx and Microsoft donated 2 Microsoft Surface RT Tablets to Joshua Adkins, a former patient at a Shriner’s hospital who took on the project as an Eagle Scout.

Adkins, suffered from Legg–Calvé–Perthes disease, a childhood hip disorder when he was 7 years old, and he is now a healthy teen who wanted to give back.

You can see more on the project here.