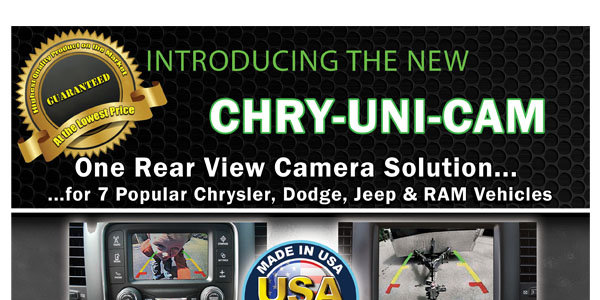 NAV-TV introduced a new Chrysler backup camera interface that works with 7 Chrysler, Dodge, Jeep and RAM vehicles at what it calls the lowest price in the industry.

The new interface covers more vehicles with one SKU than its predecessor and carries a price tag about half of that of the earlier version.

The CHRY-UNI-CAM allows users to add a backup camera (not included) in Uconnect vehicles with 5-inch or 8.4-inch screens. The image is automatically displayed and no dealership coding is required. The camera image automatically triggers when the car shifts into reverse and it can also be activated in any gear at any speed.

For vehicles with navigation it also offers some unlock features.

The interface is 100 percent plug and play, says NAV-TV. It is shipping now at $287.98 without the camera and additional packages are available that include the camera.

The CHRY-UNI-CAM is compatible with the following late-model Chrysler, Dodge, Jeep and RAM vehicles: