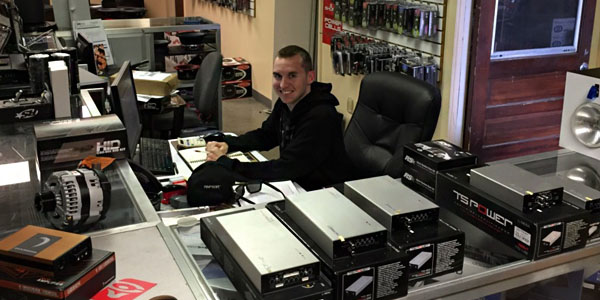 Bill Calhoun of Ultimate Marketing in FL won our Facebook context for “liking” CEoutlook, and his prize is a story on his company, a distributor/rep, which just picked up the Kenwood line in the Carolinas.

First, about Calhoun, he worked at Best Buy for about 3 years, starting at the cash register.   He wasn’t a car audio fan at first, but around the time that Best Buy took on Kicker, he was promoted to sales and chose to go into the car stereo department.

“Honestly, I had zero experience with car audio but I had a lot of friends getting into the systems and I had the privilege of working with three master certified installers at the store. They taught me the basics of it. They had been in it for years and still had a really big passion for it and that made me want to get into it,” said Calhoun.

Eventually, the local distributor, Ultimate Marketing recruited Calhoun and he became Inside Outside Sales Rep for the firm.

Ultimate is an 8-year old distributor/manufacturer’s rep firm located in South Carolina and Florida. In addition to Kenwood, the firm also carries brands including db Drive, Cerwin Vega, Diamond Audio, Metra. Accele, Atrend and Race Sport (lighting). Lighting is actually 25-30 percent of its business with car audio representing about 30 percent and sub boxes, cameras and accessories accounting for the remainder.

Ultimate is led by Kevin Holder out of South Carolina.  Around two years ago, Holder asked his best from high school, Michael Duran, to help him open a location in Jacksonville, FL. This allowed the firm to offer one-day shipping to leading cities like Pensacola and also South Atlanta.

Duran had started other businesses, including a swimming pool business and had a background in grass roots marketing. The aim was to combine Duran’s drive as an entrepreneur with Calhoun’s expertise in car audio. The Florida location doubled its business in the second year, said Duran.

Ultimate says it offers direct to dealer pricing to many retailers, which it is able to do from its rep commissions. So it saves retailers from the need for $1,500 to $2,000 direct buy-ins with suppliers and they don’t have to wait for goods to ship from California, said Holder.

The company also sells its own Tezla brand of SPL amplifiers, and plans to release a 6,000 watt model around December.   A popular, current model, the Tezla 1000, rated at 1,305 watts RMS with a very high markup has a suggested retail price of $399,