The Consumer Electronics Association (CEA) revised its forecasts, as it does every July, and it’s now predicting the car AV aftermarket will remain about flat to down 6 percent overall in dollar sales to dealers if you subtract out sales of portable navigation devices (PNDs), which we took the liberty of doing.

The CEA divides the market into “autosound” and then “mobile video and navigation.”

Autosound sales* (excluding video decks, rear seat video and all forms of navigation) will be dead even with 2011 in unit shipments and will grow by 1 percent in 2013.  In dollars, autosound* will see a 4 percent decline this year and 2 percent drop in 2013, forecasts the CEA.

Keeping sales afloat is the fact that consumers want to link their smartphones to the car radio:

“Overall revenue growth in head units is steady over the next two years but begins to decline more aggressively in 2014 and beyond due to continued softening of demand and downward price pressure,” said the mid-year report. “The second generation of aftermarket app-enabled head units is starting to hit along with MirrorLink units hitting U.S. shelves in the fall. More and better choices for consumers will further raise the profile of this bright spot in 12 volt. Questions remain as to how quickly manufacturers can move these innovations into their own vehicles, especially in models at lower price points.”

Overall mobile video (including in-dash monitors, back seat monitors and fixed navigation) will drop 2 percent in dollar sales to dealers this year and 6 percent next year, forecasts the CEA.

Back seat monitors will fall by 7 percent each, this year and next in dollar shipments.

Looking at PNDs as its own category, the CEA predicts unit sales will drop 21 percent this year and dollar sales will fall by 25 percent.  For 2013, PND sales will decline by 15 percent in units and another 24 percent in dollar shipments to dealers.

The CEA pulled no punches when it comes to summing up the outlook for mobile video and navigation (including PNDs). It predicts tablets and phone will take over:

“Already anemic sales of navigation units (both fixed and portable) take another hit with Apple’s recent announcement of free voice turn-by-turn navigation shipping with iOS6…Rear-seat entertainment sales are being hit from all sides now with Apple, Amazon and Google releasing low-cost content consumption devices that are ultimately finding a home in the backseat.  All in all, double digit year-over year revenue declines will continue as smartphone and tablet adoption rates approach saturation and claim nearly complete ownership over the dash and the backseat.” 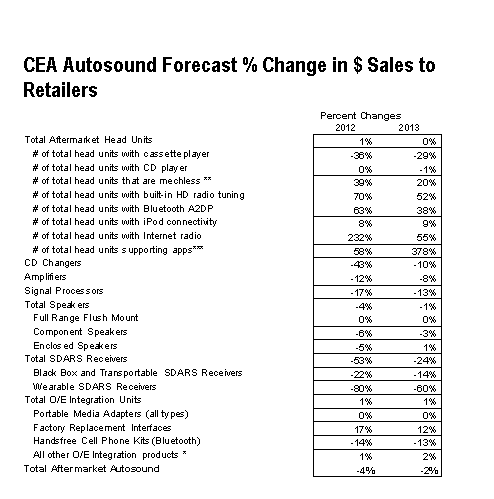