Industry members are bullish on the upcoming remote start season and are ordering as heavily as last year, despite recent economic uncertainty.

Audiovox anticipates this year’s season will be as strong as last, CompuStar (Firstech) expects its sales will grow by double digits this year.

Almost every retailer we polled said they are placing orders at least at last year’s levels if not higher. Remote starters represent about 30 percent of annual revenues for many retail specialists in the North.

“We think retail remote start sales will be as strong as last year with the variable being the weather more than the economy,” said Audiovox Electronics president Tom Malone, adding, that the company ordered supplies to support similar levels as last year.

“It could be a different story at the car dealer. Car sales could be significantly impacted by a sustained economic downturn along with the accessories that are typically added to them,” said Malone.

Directed Electronics said its sales have gained in remote starters with each consecutive year and its expects high growth in the SmartStart series that starts your car from a smartphone. 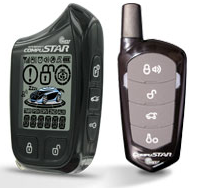 Mark Miller of Westminster Speed and Sound is expecting “serious double digit growth” this year after a record year in 2010 in remote starters. One reason he’s optimistic is that the new cars that have surged in popularity are now compact models that don’t tend to ship with remote start from the factory.

ABT Electronics, Glenview, IL is a bit concerned about disposable income but said it will likely buy heavily in the next couple of weeks. The company doubled its sales last year over 2009 to over 1,000 units.

Compustar director of sales & marketing Jason Kaminski says the penetration of cars on the road with remote starters is still in the low single digits.

Despite a rollercoaster economy, he said,  “The exciting thing is the opening price point is still under $200 installed…the economy is not doing that great, but most consumers will still spend $200 on a gift item, so remote starters will still be high on the Christmas list.”