Tint World of Fort Lauderdale did a unique install in a coffin. Yes, a coffin! A musician named Darrell Kelley was referred to their store to outfit it for a music video he was shooting to be used on his live tour. As you can imagine, adding audio to a coffin was well outside the norm, but the team embraced it. It has even led to them getting the job to add audio to the hearse that will also be used on the tour and the potential of more coffins in the future. I gotta say, this project worked out well for everyone.

The project started with a consultation involving the sales manager, technician, and the client. After the proposal was approved, the coffin was delivered to the shop. That sounds weird, huh? One of the design goals was an extended run time for the audio system while running off the batteries. Four hours at full tilt was the end result, per the team at Tint World. 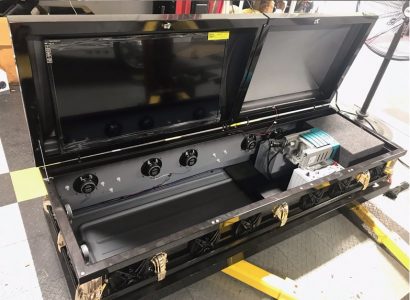 The audio equipment was all Sony, starting with one of Sony’s marine decks that fed an XM-GS6DSP amplifier. The subwoofer section powered a GSW121D sub that was mounted in a custom sealed enclosure. The four remaining channels powered 8 pairs of Sony XSR1646 coaxial speakers. From the pictures, it looks like the end result was sound from every angle. Two Deka 8G31 deep cycle batteries were used to power the system along with a Master Volt 50 amp battery charger to power them back up.

A Transit 40” video screen was also incorporated into the build and of course, LED accent lighting was added underneath the coffin as a finishing touch. As you can imagine, from an initial contact about adding audio into a coffin, to then getting the job to outfit a hearse, and finally, finding out it will be used in a music video and tour, I would say that Tint World Fort Lauderdale is extremely happy they took on this unique project. Do you have a unique project for us to consider? We would love to see it. Simply email me at [email protected]

About Mr Retail
Mr Retail offers opinions and information on car audio retailing for CEoutlook. He wishes to remain anonymous. He has owned a retail store in this country for over 20 years now. Mr Retail loves what he does and loves the 12 volt industry and is happy to share his hard-won expertise.